Free* shipping on orders of $99 or more. No coupon code needed. 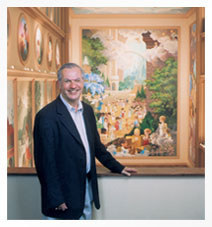 Samuel John Butcher was born shortly after midnight in Jackson, Michigan on January 1, 1939. He was the third of five children who grew up in a very poor family. The family moved to Northern California when Sam was quite young, settling in rural Redding.

Most of Sam's childhood days were spent drawing and sketching under the dining room table. At a very early age his talent was recognized by both family members and friends, but because his family was so poor, drawing materials were hard to come by. Sam was a clever child however, and soon his favorite place was a factory dump near his home where he would search for rolls of paper to draw on.

Some of Sam's fondest memories are of his grandmother telling him Bible stories. He always had a deep interest in spiritual things and even from his early childhood, he painted scenes from the Bible. During his school years, he studied hard and won awards, but all of that was not enough to fill the emptiness and lack of fulfillment he felt inside.

Sam's life changed one night in a country church, where he heard the good news of salvation. He responded to the invitation and asked Jesus to come into his heart. Since that night, he decided to only use his talent for the Lord.

With his mother’s encouragement, he pursued formal art training following his high school graduation. He won a scholarship to the College of Arts & Crafts in Berkeley. Sam married his college sweetheart and the young family moved back to Michigan where Sam took a job in the shipping department of the Child Evangelism Fellowship. His first position as a real artist came when CEF promoted Sam to the art department. It was there he learned how to study the Bible and, as he did, he grew in grace and in the knowledge of the Lord. As he began to grow spiritually, so did his desire to reach out to people with a message of God's love.

To convey his message, Sam began drawing the endearing teardrop-eyed children he called “Precious Moments” for family and friends. Then, for several years, Sam was seen on television as the story illustrator for the inspiration children's program, Tree Top House, drawing his teardrop-eyed images to tell the stories.

Precious Moments artwork was introduced to the public in 1975 on inspirational greeting cards and posters, and in 1978 the first Precious Moments figurines were unveiled. But even the success of what he created did not satisfy Sam. In his heart was a desire to honor the Lord by building the Precious Moments Chapel. Since the structure's initial completion in 1989, millions of visitors have come to admire his work and share his faith.

Sam has never forgotten his humble beginnings. Even though he is one of America's most beloved artists, he remains a quiet family man. Nothing means more to him than his children and grandchildren, as he takes advantage of every opportunity to make them an active part of his life and his work.